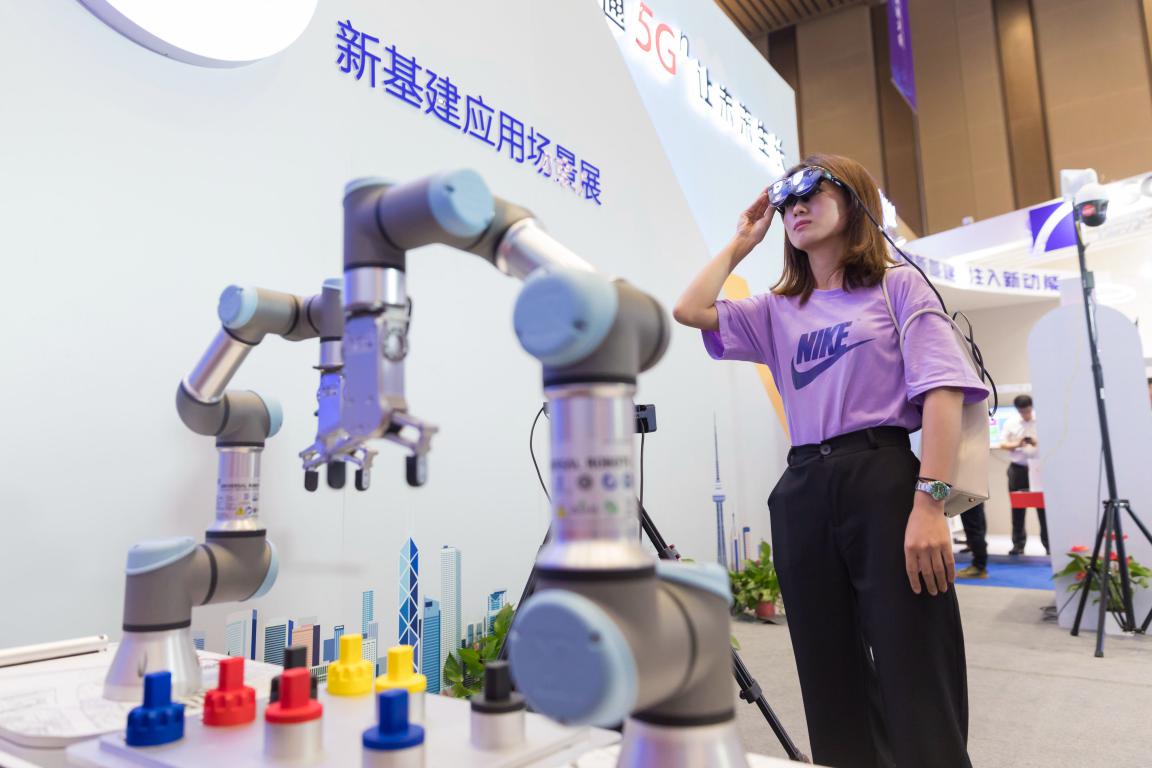 Thanks to the introduction of 5G unmanned bridge cranes, Tian Liang, who has been a bridge crane driver at China’s large steel enterprise HBIS Group Tangsteel Company for 20 years, doesn’t need to endure high-intensity work in harsh working conditions anymore.

“I used to sit in the crane cab for eight hours a day and barely had time to go to the bathroom,” Tian recalled, describing his previous working conditions and tasks as high-temperature, high-altitude, and high-intensity.

Since his company introduced 5G equipment, work of Tian and his colleagues has undergone huge changes.

Today, they are able to control bridge cranes accurately and remotely in a clean and quiet operation room with the help of high-definition cameras and display screens. The old days when they had to “climb up to and down from the crane cab that is cold in winter and hot in summer” are long behind them.

“During the first four months of this year, our 5G unmanned bridge cranes performed tasks for 73,500 times and transported 1.4 million tons of goods, a year-on-year increase of 25 percent,” said Li Renlong, an executive with a high-strength automotive steel sheet manufacturing subsidiary of HBIS Group Tangsteel Company, adding that during the period, no damage to goods had occurred during lifting operations of the automatic bridge cranes, and that their utilization efficiency exceeded 95 percent and failure rate dropped by 21 percent.

The 5G unmanned bridge cranes have enabled the manufacturer to increase its daily shipments by 1,305 tons and its annual economic benefits by nearly 10 million yuan ($1.54 million), according to Li.

Besides to the field of unmanned bridge cranes, 5G network is bringing many more other positive factors for innovation to iron and steel industry. The synergy formed by technologies in such fields as 5G network, AI, big data and cloud computing has turned each production line into a large smart robot, achieving automation in almost all production links, from material transportation, blast furnace ironmaking to loading of products, noted Guo Liang, director of the information and metrology department of Shougang Jingtang United Iron & Steel Co., Ltd.

“5G network and AI have guaranteed uniform standards for the testing of clothing fabric and details and that of the production process compliance, which weren’t easy to keep in the past manual testing,” said Gu Yuejun, chief information officer of Youngor Apparel Manufacturing Co., Ltd. based in Ningbo, east China’s Zhejiang province, which is also a beneficiary of 5G network.

At the end of 2020, a 5G-driven intelligent manufacturing display platform established by Youngor and Chinese telecommunication operator China Unicom was launched, which has made Youngor’s production visualized, transparent, predictable and self-adaptive. It has increased the clothes maker’s production efficiency by 25 percent and cut its production cycle of bulk orders by 30 percent.

The industrial Internet innovation team of China Unicom has helped Youngor, based on its achievements in production automation and management informatization, further achieve real-time interaction between human and machines and equipment, as well as real-time management of materials, energy consumption and quality inspection through a fully-connected platform by deploying 5G and edge computing technologies, said Zeng Guofeng, general manager of the branch of China Unicom in Ningbo.

Besides, the platform has helped Youngor improve production efficiency and product quality by leveraging big data and AI, Zeng added, who believes that China Unicom can upgrade the platform into a “brain” for clothing manufacturing and infuse vitality into small and medium-sized companies in the future.

Reducing cost and improving production quality and efficiency are considered driving forces behind the technological advances and management innovation of manufacturing enterprises.

In recent years, 5G technology has developed rapidly in China. As of the end of June this year, the country had established 961,000 5G base stations and the number of its 5G terminal connections reached 365 million.

China has completed nearly 1,600 projects that integrate 5G into industrial Internet, which cover over 20 key industries and fields. More industries are expected to embrace great changes and development through innovation driven by the next-generation information technologies such as 5G technology and new demands of industries.

As digital and smart technologies are increasingly integrated into infrastructure construction, various industries are expected to embrace greater driving forces for innovation and creation.