Chinese President Xi Jinping said the Chinese side stands ready to coordinate with the IOC and support the holding of the Tokyo Olympics in a phone conversation with International Olympic Committee (IOC) President Thomas Bach on Friday.

Congratulating Bach on his re-election as IOC president, Xi said that under Bach’s leadership, the IOC has pooled the efforts of various parties and scored a vigorous development of the Olympic movement.

He noted that since the onset of the COVID-19 outbreak, the IOC has done a lot of work and infused positive energy into the global solidarity against the pandemic.

The disease has made a major impact on sports events such as the Olympics, Xi said, adding that China stands ready to work with the IOC to strengthen vaccine cooperation and jointly build an effective line of protection for athletes participating in the Games.

Xi stressed that China is steadily carrying forward all preparations in order to host the Beijing Winter Olympics and Paralympics on schedule. 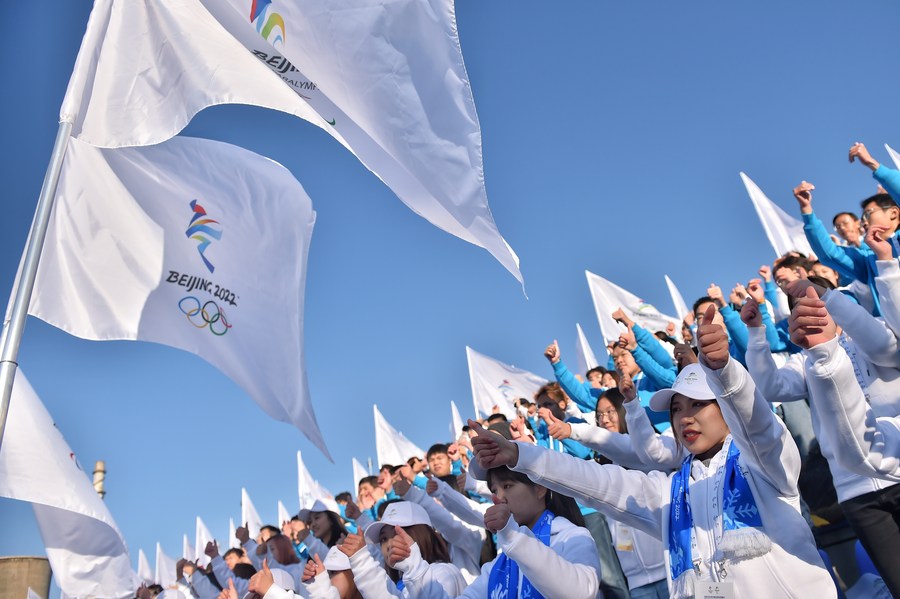 Volunteers attend the launching ceremony of the global recruitment of volunteers for the 2022 Olympic and Paralympic Winter Games in Beijing, December 5, 2019. /Xinhua

Now the construction of all competition venues has been completed, the organization of the Games and operation of the venues are being carried out in an orderly manner, logistical efforts are picking up steam, and publicity, promotion and cultural activities are going on in an orderly fashion, he added.

The Chinese side has carried out test runs of snow and ice sports, and effectively tested key elements involved in holding the Games, Xi said, adding that China will organize various test runs in the second half of the year so as to lay a firmer foundation for the Beijing Winter Olympics and Paralympics.

The Beijing Winter Olympics and Paralympics are a grand event for all countries and a stage of fair competition for athletes from all over the world, Xi stressed, extending gratitude to the IOC for its active support and guidance for the preparations of the Beijing games.

China, he added, is ready to work with the IOC and the international community to ensure that the Beijing Olympic and Paralympic Winter Games will be a simple, safe and wonderful Olympic event.

On his side, Bach congratulated China on its successful control of the epidemic,saying the country has taken an “important lead” in the global COVID-19 fight and economic recovery.

(With input from Xinhua)

World Malaria Day: 14.7 Million Doses of Treatment and 7.1 Million Nets for Nigerians in 2020

You may have missed